While urban centers continue to offer subcultural realms in which LGBT individuals may function in freedom and acceptance, the majority of people still live in smaller communities. And while attitudes concerning the LGBT community have greatly changed in the last forty years, living openly in less urban settings continues to be a challenge. In these regions traditional religious mores still frame the attitudes and actions of even those who do not necessarily ascribe to those faiths. The long held fears of rejection by family and friends also remain, causing many to live either untruthful or secret lives. These paintings on antique book pages were created in such non-urban settings and represent two different but related series.

The Permanent Fixtures series—the images of urinals—alludes to common cultural discomforts with male intimacy, whether homosexual or heterosexual. The absence of figures among these closely spaced urinals begs questions about sexual identity in men. The mixture of text and imagery also denotes the coded communications of closeted gay and bisexual men. Outside of gay subcultural centers, the communication among gay men often begins by “reading between the lines.” There is a “subtext” to these works and they can be read in multiple ways at the same time. Only a close inspection reveals the fullness of the communication.

The Saints, Sinners, Martyrs, & Misfits series is composed of a variety of portraits (including Andy Warhol, gay Episcopal bishop Gene Robinson, fallen evangelical leader Ted Haggard, Matthew Shepherd, and artist Tim Rollins, etc.). All the figures in this series are painted on pages from religious books or Bibles. The duality of text and image is matched by the figures. While the figures are not traditional canonized saints, they have each garnered praise from various people and groups. At the same time, other groups have been less appreciative of these individuals. The political left and right are at odds concerning several of these figures. Those with religious leanings—in both camps—have either praised or denounced these “saints,” using the same criteria to either lift them up or tear them down. Like the traditional saints, these are just ordinary people with good points and bad points. It should never be our prerogative to canonize or demonize public figures we do not personally know. These paintings seek a common ground between the increasingly polarized segments of our larger society. 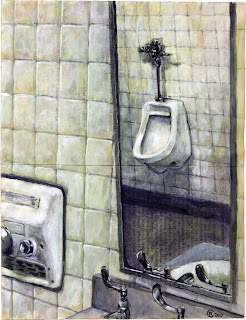 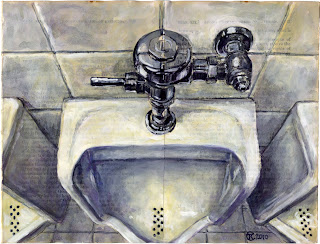 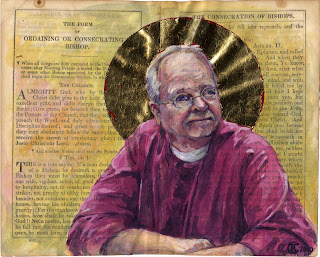 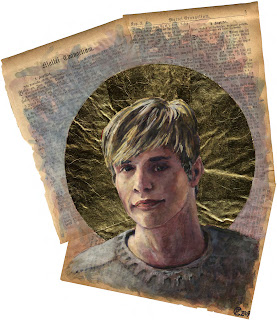 Additional images from both of these series are available at www.tyrusclutter.com.
Posted by Queer Diaspora at 11:43 PM